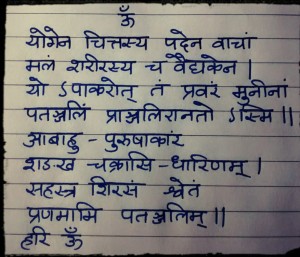 My first brush with Iyengar yoga was over 20 years ago at a foundation. At that time, I had yoga sessions twice or thrice a week for a period of about 9 months and it was something I looked forward to. Once I was away from that place, yoga fell by the wayside as I chased the excitement of life outside. A decade later, pregnant with my second child, I found myself at an Iyengar yoga class, twice a week for about 7 months. At this time, I had the honour of seeing Guruji in person at a function conducted by the same organization. It was the most spontaneous act for me to touch his feet and seek blessings for myself and my unborn child. Growing up in a Christian household, touching the feet of elders was very alien for me but somehow it just seemed natural. After giving birth, I got sucked into the drama of a new child, work and home and never got back. 3 years ago, soon after moving cities, I found an Iyengar instructor nearby and started attending classes for a few months until I hit a tight spot financially. In retrospect, I could have spoken with my teacher and something could have been worked out. But, I guess I was not ready then. About 7 months ago, I went back, yet again, to the same class as I was at my wit’s end with chronic cervical spondylosis that interfered with my running. Finally, I am a student at RIMYI, a long lost dream and hope to stay on the path, come what may. Something changed this time. Maybe I was ready to be taught. Running helped in bringing some much needed discipline through a basic level of endurance and resilience. Running freed me from my preconceived limitations and allowed me to believe that I could persist. I think of it as one of the niyamas that helped me find some grounding and not take off on a flight of fancy. I don’t know what shifted, when or how and it doesn’t even seem relevant. All that is left is a deep sense of reverence for my teacher, her teachers, Guruji and his teacher, all those before him and Sage Patanjali who have shared and continue to share their knowledge and wisdom. I only hope to remain ever a student. pranamami patanjalim hari om

7 thoughts on “a sadhaka”