Death, well I don’t know anything about it except that every thing that is born dies.

Yesterday morning, I was tired. So tired that it would have been easy to turn into a puddle of tears. But, somewhere there was the stubborn runner’s grit that gave me a mental shake and I could get on with the day. It is not easy to care for someone who needs constant assistance, manage work and home while going through personal turbulence. Somedays, it gives and it’s ok.

The fatigue is overwhelming and I have been finding it difficult to do my asana practice and reading study. So, I opened a random page and it fell on 13:9 which echoed the trajectory of birth, old age, disease and death, the same musings that I have been pondering upon. In a nutshell, pain.

The same pain that galvanized Prince Siddharth to Buddhahood. I see Amma, frail and broken, suffering physical and mental pain. While assisting her or cleaning her, I see how the skin folds into yet more pain. There is no privacy of body as she is dependent on someone to help her with her bodily functions. While my instinctive thought is ‘I wish I don’t live to be that old or ever get into a situation that I need someone’s help to use the bathroom’, the next is almost a prayer that I have enough gracefulness to accept such a condition if it come to be. Guruji’s words are joyful as far as living and dying are concerned- “Live happily, die majestically”. One could be a bag of sores and still die a majestic death.

It got me thinking of the klesas, the afflictions of avidya, asmita, raga, dvesha and abhinivesa. In the commentary, they are classified neatly into intellectual, emotional and instinctive categories. The more I read, the more I realise how much the commentary still leaves to self-exploration. Layers upon layers.

I remain grateful for all the help and love the universe provides in abundance. The silver lining in these grey rainy days has been to see a smile on Amma’s face finally. She has turned a bend and feels a glimmer of hope. That is more than enough. 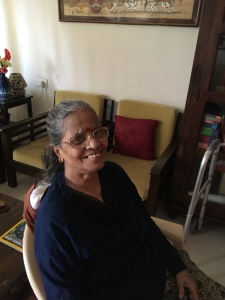 A few days ago, I was out early and saw a barefoot runner in the rain. The image stayed with me until I got back home and sat sipping my coffee. There sprung a few lines as I sat in the balcony full of the moment.

Fast forward to today, my reading was focused on the Bhagwad Geeta 13:25. Part of the commentary in that shloka spoke about vichara and my mind went to the sutra that talks about vitarka, vichara, ananda and asmita. So, I did what any good student would do and opened up my books. 🙂 I now see the value in memorising and why the Indian system of study has always been heavy on rote learning.

If I had to take it step by step, it would begin with the Geeta shloka that goes, “Some, by meditation, behold the Self in the Self by the Self; others by the “YOGA-OF-KNOWLEDGE” (by SANKHYA YOGA); and others by KARMA YOGA.

The Yog Sutra reads as “Practice and detachment develop four types of samadhi: self-analysis, synthesis, bliss and the experience of pure being.”

For ease of use, I have stuck to the translations by Swami Chinmayananda and B.K.S.Iyengar respectively.

The sutra looks deceptively simple but is like waves upon waves of brilliance. It is the culmination of the previous 5 sutras beginning with Abhyasa vairagyabhyam tannirodhah (1:12). The commentaries have been pretty extensive on this one and this tasting is just that, a tasting. There are so many layers packed into its wisdom. All I sense now is an intuitive sense of light and I hope it will reveal itself. It’s interesting that the first pada is Samadhi pada and it weaves around the theme of abhyasa and vairagyam be it in the means, effects or obstacles.

It’s interesting how the four stages of samadhi are not just progressive but also integrative. It is clear in the kosas, one enveloping the other or the overlapping elements, gross and subtle or then the construct of the embodiment and all its systems. Progressive in it’s faculty of making available only what one is ready for and integrative in that we already have all that we need to behold the Self within.

My instinctive reaction to anything to do with samadhi is that it is way off my league, I’m most comfortable being a mridu student. And yet, there are moments, like in today’s limitless savasana when there is only space. The frailties of body and mind do not exist there. But, it doesn’t happen often and a day like today feels like a benediction. Outwardly, things are in flux with Amma recovering slowly from a surgery and a limbo in all other areas of life. I haven’t been able to get to class and even home practice was in shambles with hospital duty but I could manage a little today. I don’t know about tomorrow. For now, I am grateful for yoga through study. There is a yoga for everyone.

I’ve been loathe to write here for a couple of reasons, one of them being a big shift in life and the other a hesitation to jump to hasty conclusions. Suffice to say, my readings have taken on a more practical colour as I seem to receive messages that are congruent. It is easy to latch on to what I perceive as signs so I just observe and record.

One of my anchors through my yoga journey has been Sutra 1:33 and I’ve always looked at just the four attitudes of maitri, karuna, mudita and upeksha. I didn’t quite spend time on the remaining part of the Sutra. I didn’t look at the phala of the attitudes or the occasions to practise the habits.

It seemed like a good idea to explore the different interpretations of this aphorism and I pulled out all the commentaries I had with me. Each of them threw the spotlight on a different portion of the sutra. 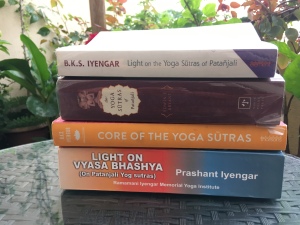 Chitta prasadanam as opposed to chitta vikshepa from Light on the Yoga Sutras of Patanjali by B.K.S. Iyengar

Bhavanata versus Abhyasata from Light on Vyasa Bhashya by Prashant Iyengar

Upeksha as equanimity in meaning versus the common translation as indifference from The Yoga Sutras of Patanjali by Edwin F. Bryant

The four attitudes as a representation of parinama chitta and kutastha chitta from Core of the Yoga Sutras by B.K.S. Iyengar

All in all, a very illuminating morning of study. In the commentaries by Guruji and Prashantji, I found the approach is more lateral and explorative while the one by Edwin Bryant is more direct and translative. I took back something from both and know that I will come back for more. It remains my favourite sutra and perhaps the one I would retain if I could choose but one. As an ordinary woman, it offers me the potential to soar even as it shows me how to be in this world but not of it.

Closer to my experience, I discovered that even while I thought I was failing, there was the solidity of practice (not so much asana as the study of the texts and their contemplation). It gave me the strength I needed to go through a very difficult patch and maintain a sense of steadiness even as there was upheaval, mental and emotional. I received courage to stand in tadasana in my life even as the ground below me trembled.

I remain indebted to the teachings of the ancient ones as well as the Gurus in my heart and all those who have shared their journeys generously.